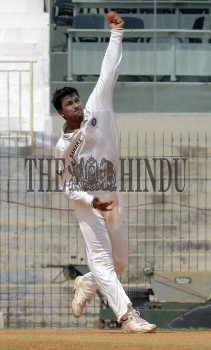 Caption : Chennai, 13-10-2013: Pragyan Ojah, who claimed 6 wickets in the second innings, did the star turn for South Zone on the final day of the Duleep Trophy semifinal cricket match against Central Zone held in Chennai on October 13, 2013. Photo:S_R_Raghunathan