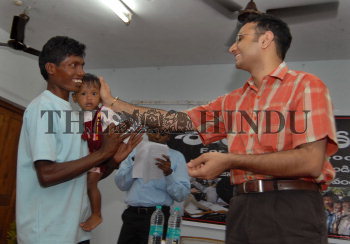 Caption : VISAKHAPATNAM, 17/10/2007: Superintendent of Police Akun Sabharwal pats son of surrendered naxalite Podugu Laxmaiah after HANDING OVER a cheque for Rs. 1.80 lakhs, which was announced as a reward on his head while a member of the CPI (Maoist), at the Shanti Kosam programme organised by the district police in Visakhapatnam on October 17, 2007. Ten naxalites who surrendered were handed OVER the reward on their heads at the 'Shanti Kosam' (for the sake of peace) programme, a sort of surrender mela, organised by the district police Photo: K. R. Deepak