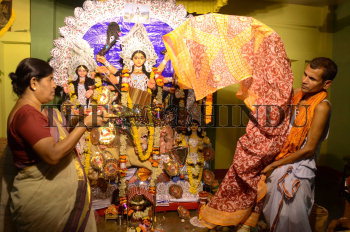 Caption : kOLKATA, WEST BENGAL, 11/10/ 2013: A prist preform RITUALS with a banana tree wrapped in a sari, symbolising the wife (Bengali wife Kola Bauy - Pantheon) of god Ganesha, near the river Ganga, on Magasaptami of Durga Puja festival in Kolkata on October 10, 2013. The five-day Durga Puja festival commemorates the slaying of a demon king Mahishasur by goddess Durga, marking the triumph of good over evil. Photo: Sushanta Patronobish