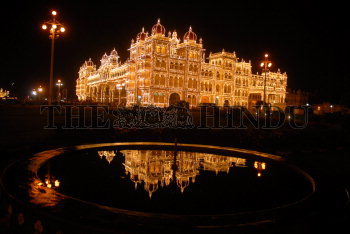 Caption : BANGALORE, 07/10/2013: Reflection view of Mysore Palace. Now anybody can have a private party in front of the Mysore Palace, which will be lit especially for individual by paying for it. The royal celebration will cost Rs. 50,000 .The palace is normally illuminated on all ten days during Dasara, public holidays and Saturdays and Sundays. The Mysore Palace Board has mooted the idea to bring the heritage structure closer to the people and also to earn revenues for the Mysore City Corporation. The private celebrations can be had after the light and sound show in the evening. Over one lakh incandescent bulbs light up one of the most important tourist destinations in the city. Every year, the palace is illuminated for approximately 130 hours, with electricity bill running up to Rs 60 lakh, which is borne by the Mysore City Corporation. The Mysore Palace Board has thought of private celebrations to earn some revenues. Photo: G.P. Sampath Kumar Photo: G_P_Sampath Kumar