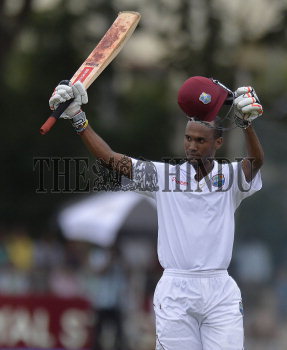 CRICKET INDIA - A VS WEST INDIES - A

Caption : SHIMOGA, Karnataka 05/10/2013 West Indies 'A' team Player Kraiggg Brathwaite waving at the crowd after scoring a century during the four-day cricket match against India 'A' team at Jawaharlal Nehru National College of Engineering grounds in SHIMOGA on October 5, 2013. Photo: G.P. Sampath Kumar