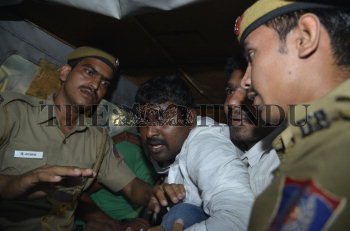 Caption : New Delhi, October 3, 2013: Seemandhra supporters being arrested after they protested at the Prime Minister's home in New Delhi on Thursday, October 3, 2013, ahead of a Cabinet meeting where major steps are expected to be taken in the process of carving out a separate Telangana state from Andhra Pradesh. The demonstrators want a 'United Andhra'. Photo: Rajeev Bhatt