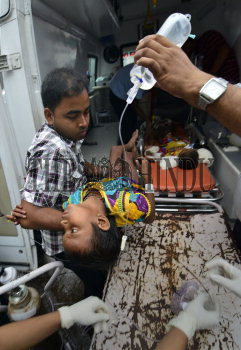 Caption : GUWAHATI, 03/10/2013: A girl injured in the road accident is being taken to Guwahati Medical College Hospital in Guwahati on October 03, 2013. At least 30 people were killed and nine others injured in a road accident in Assam's Barpeta district on October 03, 2013. According to reports, the mishap took place when two mini buses collided on National Highway (NH)-38 under the Sarbhog police station. Most of the victims were brick kiln labourers and their families. The injured have been admitted to the nearby hospitals. The minivans had been carrying workers, some with their children, to a local brick kiln. The truck was traveling to the neighbouring state of West Bengal. Photo: Ritu Raj Konwar