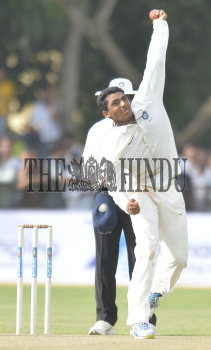 CRICKET INDIA - A VS WEST INDIES - A

Caption : SHIMOGA: Karnataka 02/10/2013 India 'A' team bowler Bhargav Bhat in action during the cricket match between India 'A' team and West Indies 'A' team at Jawaharlal Nehru National College of Engineering grounds in SHIMOGA on October 2, 2013. Photo: G.P. Sampath Kumar