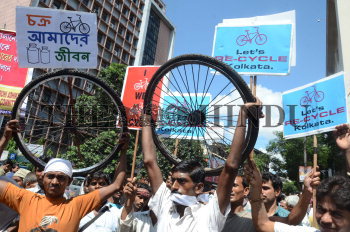 Caption : KOLKATA, WEST BENGAL, 02/10/2013: People stage a protest in Kolkata on October 02, 2013. against the ban on bicycles and non-motorised transport in 174 thoroughfares of the city. Photo: Sushanta Patronobish