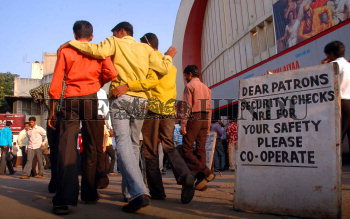 Caption : HYDERABAD, 15/10/2007: Notices placed in front of a cinema theatre in Hyderabad on October 15, 2007. In the wake of the terror attack in a theatre at Ludhiana in Punjab the previous day, cinema halls in the twin cities are fully geared up to meet any terror THREATS as security has been increased on the hall premises. Photo: Mohammed Yousuf