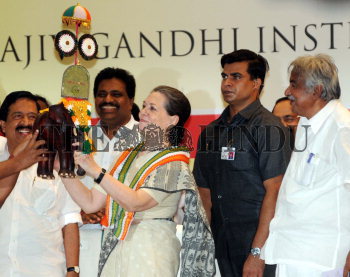 Caption : THIRUVANANTHAPURAM, KERALA, 29/09/2013: Of Kerala - UPA Chairperson Sonia Gandhi having a look at a memento given by the KPCC during the inaugural ceremony of the research and training complex of the Rajiv Gandhi Institute of Development Studies at Neyyar in Thiruvananthapuram on Sunday. Chief Minister Oommen Chandy, Union Minister of State for Labour Kodikunnil Suresh and KPCC president Ramesh Chennithala look on. Photo: S. Gopakumar