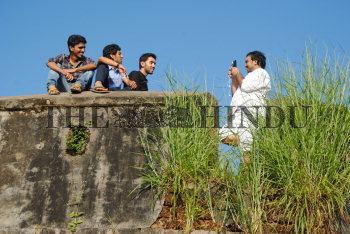 Caption : MANGALORE, KARNATAKA, 27/09/2013: Every year on World TOURISM Day (September 27), ministers AND officials announce grAND plans to promote TOURISM, but this neglected watch tower in Sultan Battery built in 1784 by Tipu Sultan exposes the emptiness of such promises. Unmindful of the official celebrations elsewhere, these tourists at the tower are capturing memories for a lifetime, in Mangalore on September 27, 2013. Photo: H.S. Manjunath