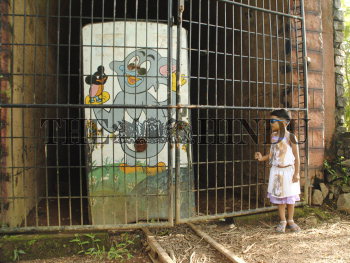 Caption : MANGALORE, KARNATAKA, 26/09/2013: Off the track: A young girl looking at Kadri Park's toy train in Mangalore which is retired because of old age. Park officials say the train was built in 1979 and introduced at the park in 1989. After a decade of glitch-ridden ride, the train was relaunched in January 2011 and since then was a source of non-stop joy for children. Photo: H.S. Manjunath