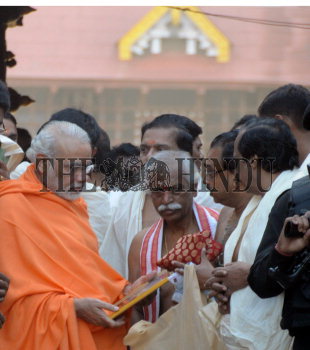 Caption : THIRUVANANTHAPURAM, KERALA, 26/09/2013: The BJP's Prime Ministerial candidate for the 2014 Lok Sabha elections and Gujarat Chief Minister Narendra Modi being presented with a picture of Sree Padmanabha Swamy after his darsan at the Sree Padmanabha Swamy Temple in Thiruvananthapuram on Thursday. Photo: S. Gopakumar