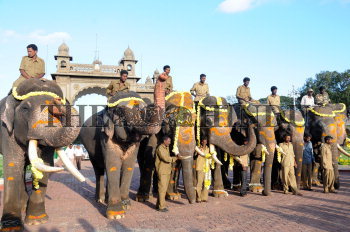 Caption : MYSORE, KARNATAKA, 24/09/2013: The second batch of eight Dasara elephants were welcomed to the PALACE camp in MYSORE on September 24, 2013 after customary offering of puja. Photo: M.A. Sriram