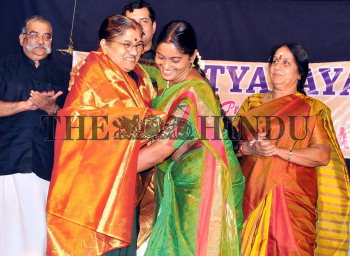 Caption : KOZHIKODE, KERALA, 23/09/2013: Felicitating a senior - Kalamandalam Saraswathi, winner of the 'Nritya Natya Puraskaram' instituted by the State government, being presented a 'Ponnada' by Kalamamandalam Geetha Prasad, who runs a dance school named Nrityalaya, at a function in Kozhikode on Monday. Photo: S_Ramesh Kurup