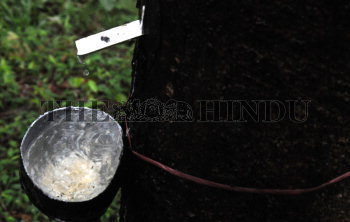 Caption : Kochi, Kerala, 13/09/2013: A rubber treee under tapping near Kothamangalam, a traditional rubber-growing area in Kerala. Rubber Board estimates have put natural rubber production during the current financial year down by nearly 10 per cent. NR production during the current financial year is likely to be 8.70 lakh tonnes against the earlier proejction of 9.60 lakh tonnes. Heavy rains in June and July and Abnormal Leaf Fall among trees have contributed to reduced production. Photo: H. Vibhu.