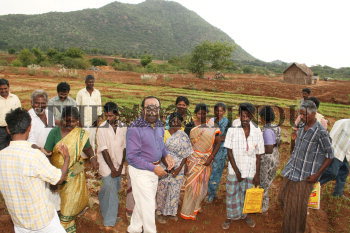 Caption : MADURAI,OCTOBER 11,2007. :District Collector S.S.Jawahar, interacting with the beneficiaries of the Two Acre Free land scheme where the barren tract of land was made arable at Kulasekarankottai in Vadipatti near Madurai on October 11, 2007.-PHOTO:S_JAMES.