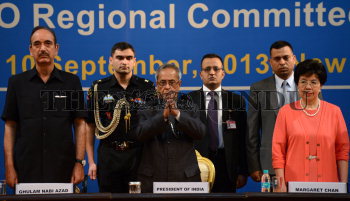 Caption : NEW DELHI, 10/09/2013: President Pranab Mukharjee, Health Minister Ghulam Nabi Azad and Margaret Chan, Director General of WHO during the 31st Meeting of Ministers of Health of Countries of the WHO South-East Asia Region and 66th Session of the WHO Regional Committee for South-East Asia’ in New Delhi on Tuesday. Photo: R.V. Moorthy