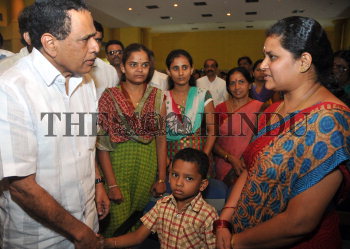 Caption : BANGALORE, KARNATAKA, 06/09/2013: Minister for Primary and Secondary Education Kimmane Ratnakar at pulic hearing which was conducted by Karnataka State Commission for Protection of Child Rights- Public Hearing on "Right to free and compulsory Education Act 2009 and Right to Education Rules, Karnataka 2012 for effective implementation of RTE Act and Rules," in Bangalore on September 06, 2013. Photo: V. Sreenivasa Murthy