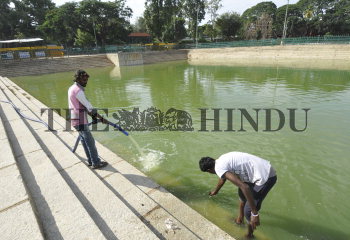 ULSOOR LAKE, LIKE MANY OTHER LAKES AND TANKS IN BA

Caption : BANGALORE, KARNATAKA, 06/09/2013: Ulsoor Lake, like many other lakes and tanks in Bangalore is getting ready to meet the Ganesha festival crowd. Specially made immersion tank is cleaned and filled with the lake water. Soon barricades will be erected and cranes, public sound system and volunteers will be deployed to help the devotees in the immersion process with BBMP new guide. Nearly one lakh idol are expected at Ulsoor Lake alone on the first day. Photo: K. Gopinathan