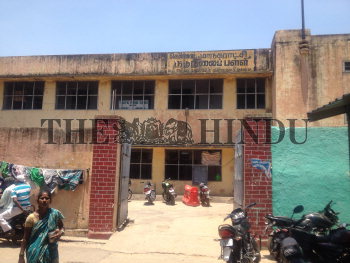 Caption : CHENNAI, 03/09/2013: Despite a new building having been completed a year ago, the Muthialpet police station continues to function out of a 49-year-old Chennai CORPORATION SCHOOL at B. R. N. Garden in Broadway in Chennai on September 03, 2013. The two-storey SCHOOL from which it functions has been certified as dangerous to use by the public works department. Photo: D. Madhavan Despite built more than an year ago, the two new police stations such as Sembium and Muthaipet remained locked due to CM's nod to inaugurate them. Photo: D_Madhavan