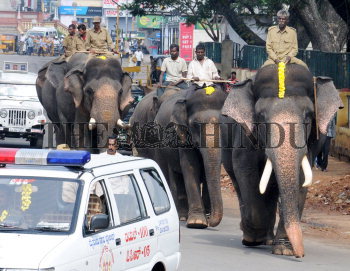 Caption : MYSORE, KARNATAKA, 03/09/2013: Put through their paces: The Dasara elephants, led by Arjuna, seem unmindful of the traffic as they get familiarised with the procession route, in Mysore on September 03, 2013. Photo: M.A. Sriram