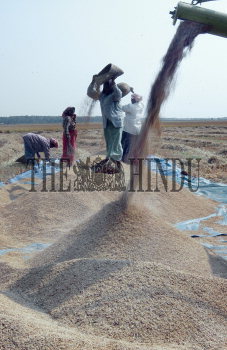 Caption : Workers threshing and winnowing the paddy at a field near Thrissur, Kerala. The Centre plans an incentive bonus of Rs 40 per quintal for the current year's paddy crop. This is in addition to the already announced minimum Support Price of Rs 645 per quintal for 'common paddy' and Rs 675 per quintal for 'Grade A' varieties. The delay in announcement of bonus is impacting procurement for the Central pool in the just - commenced 2007-08 Kharif marketing season, managing only 17.50 lakh tonnes of rice against 22.79 lakh tonnes it procured same period last year. Photo: K_K_Mustafah 10/10/07