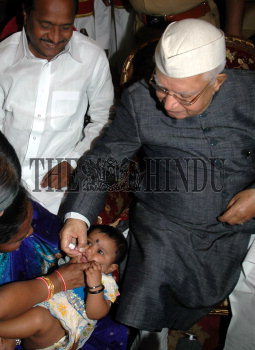 Caption : HYDERABAD, 07/10/2007: The Governor Narayan Dutt Tiwari administrating polio drops to a toddler after launching 'Polio Sunday' campaign at Raj Bhavan in Hyderabad on October 07, 2007.The campaign is to promote pulse polio immunization programme in Andhra Pradesh, according to a press release by five wild polio virus cases were reported from Visakhapatnam, East Godavari and Nalgonda districts. Photo: Mohammed Yousuf