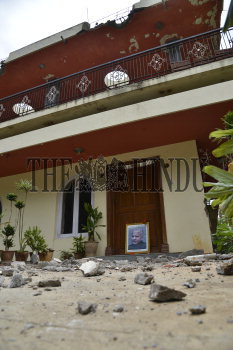 Caption : BANGALORE, 31/07/2013: The house of former Karnataka Chief Minister D. Devaraj Urs, at Sadashivnagar in Bangalore on July 31, 2013. Chaos prevailed near late-former CM Devaraj Urs residence in Sadashivnagar on Wednesday morning when family member of Urs tried to demolish the old residential building which they had leased for a private person for a period of three years. While the tenant argued demolition was illegal, Urs family members produced documents which clearly showed that the lease period was over. The demolition to be continued with police protection. Photo: K. Murali Kumar