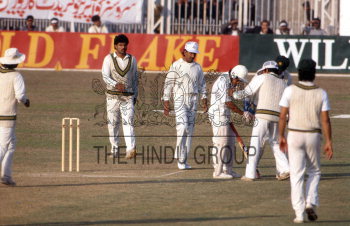 Caption : SIALKOT, 13/12/1989: TESTS, INDIA IN PAKISTAN: Young Sachin Tendulkar on his debut series was struck on the face when he ducked into a short ball from Waqar Younus that did not rise as anticipated. Gutsy youngster had his nose bloodied on impact, it was the bridge of the nose that took the force of the blow. He batted on after receiving medical attention on the ground itself and made 57, his first fifty, on the fourth day of the Fourth and Final Test between India and Pakistan at Jinnah Stadium in Sialkot on December 13, 1989. Pakistani fielders Ijaz Ahmed and Salim Malik are seen. Photo: V.V. Krishnan