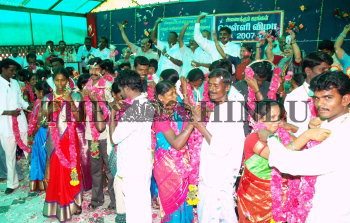 Caption : MADURAI, 02/10/2007: A grand marriage reception for prisoners who tied nuptial knots with their marital partners who were from the victims family was organised by Anaikum Karangal a voluntary organisation in Madurai on October 02, 2007. Photo: G. Moorthy