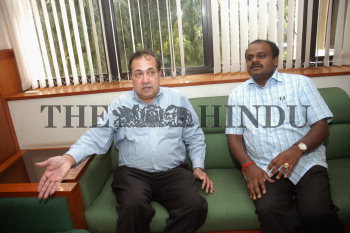 CM AT THE HINDU BANGALORE OFFICE

Caption : BANGALORE, 02/10/2007: The Karnataka Chief Minister H D Kumaraswamy along with N Ram, Editor-in-Chief, THE HINDU, during the CM's visit to the THE HINDU Bangalore office, on October 02, 2007. Photo: K. Murali Kumar