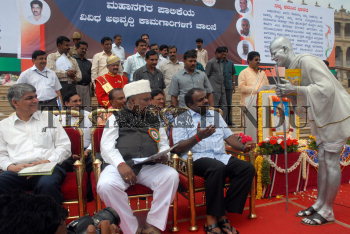 Caption : BANGALORE, 02/10/2007: Even a statue will turn for publicity! Gandhi in disguise, Byagade Halli Basavaraj, physical instructor and state award winner from kadur, Chikmangalur district who stood like a statue near vidhana soudha for non-violance day function walk to the Chief Minister H.D.Kumaraswamy only to shake hand with him and like to take a photograph with him. Others seen on the dias P.B.Mahisi, Chief Secretry GoI (left) Katta Subramanya Naidu, Industry Minister (2nd left) at the SBBMP's launching of various development works before Vidhana Soudha in Bangalore on October 2nd 2007. Photo: K. Gopinathan