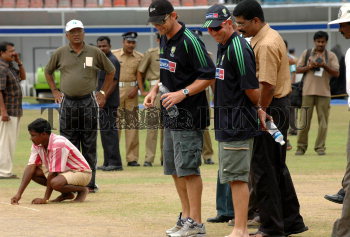 Caption : KOCHI, 01/10/2007: Australian team's vice-captain Adam Gilchrist and coach Tim Nielson inspecting the pitch at the Jawaharlal Nehru Stadium in Kochi on October 01, 2007. As more showers have been forecast for tomorrow, doubt looms over the second one day international cricket match between Australia and India to be played in Kochi on October 02, 2007. Photo: Vipin Chandran