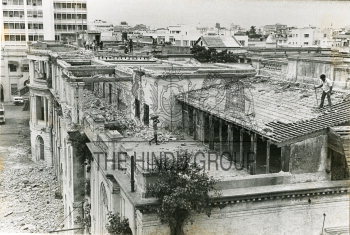 Caption : A relic comes down: Yet another landmark of the city is on its way out. Nearly 25 crowbar-wielding workers are busy pulling down the 200 year old Bentick Building better known as "Old High Court Building" in Rajaji Salai (North Beach Road). Twice saved from demolition - once at the intervention of the Prime Minister Indira Gandhi - this British relic which until a few years ago housed the Madras Collectorate will give way to a multi-storeyed complex to house Government offices. (02/08/1980) PHOTO: THE HINDU ARCHIVES