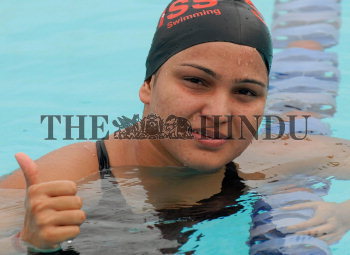 Caption : GOA, 30/09/2007: Richa Mishra of Police celebrates her victory in an event at the 61st senior National aquatics championship held at the Campal Pool in Panaji, Goa from September 19 to 23, 2007. She was declared the best swimmer in the women's category. Photo: K. Murali Kumar