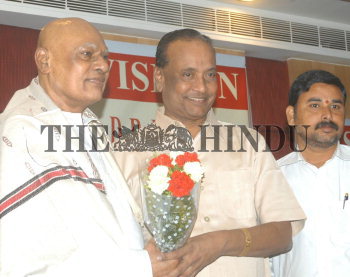 Caption : VISAKHAPATNAM, 30/09/2007: K. Rosaiah, the State Finance Minister who received an honorary doctorate from Andhra University, being greeted by former Srikakulam Municipal Chairman A. Varaha Narasimham at a felicitation organised by Wisezen at Visakhapatnam on September 30, 2007. Photo: C.V. Subrahmanyam