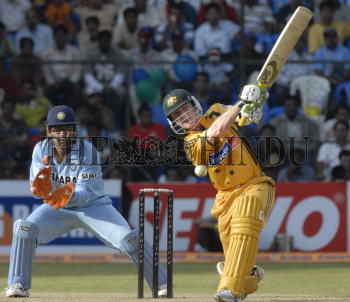 Caption : BANGALORE, 29/09/2007: Australian batsman B. Haddin plays a shot during his knock of 69 runs, watched by Indian wicketkeeper M.S. Dhoni, in the first one day international cricket match at the Chinnaswamy Stadium in Bangalore on September 29, 2007. Photo: K. Bhagya Prakash