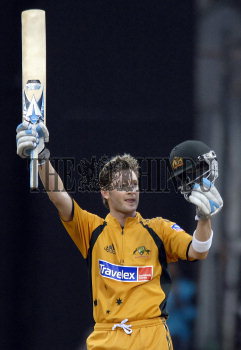 Caption : BANGALORE, 29/09/2007: Australian batsman Michael Clarke celebrates after scoring a century in the first one day international cricket match against India at the Chinnaswamy Stadium in Bangalore on September 29, 2007. Photo: K. Bhagya Prakash