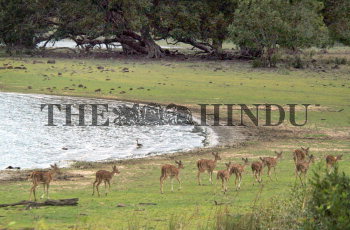 Caption : 30/09/2007 Mumbai: Deer roaming at the edge of the Tadoba Lake at the Tadoba-Andhari Tiger Reserve. With a view to preserve the fauna of India, particularly to take urgent steps to prevent extinction of any species, the Government of India established an Indian Board of Wild Life (IBWL) in 1952. The Board has since been doing pioneering work to arouse public consciousness in favour of wildlife preservation. Therefore, in order to arouse a general awakening in the common man in favour of protection of wildlife, the IBWL decided to observe the Wildlife Week from October 2 - 8 every year. Photo: Paul Noronha