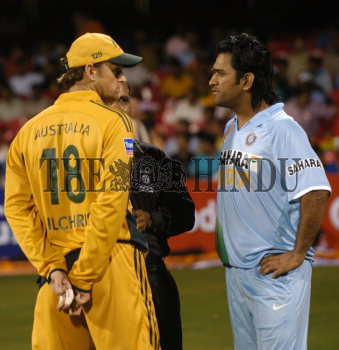 Caption : BANGALORE, 29/09/2007: Indian captain M.S. Dhoni (right) and his Australian counterpart Adam Gilchrist discussing the situation with the umpires after rain interrupted play during the first one day international cricket match between India and Australia at the Chinnaswamy Stadium in Bangalore on September 29, 2007. The match was abandoned subsequently. Photo: K. Murali Kumar