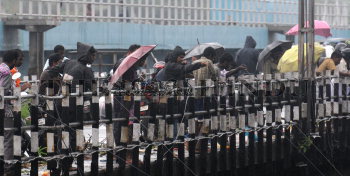 Caption : Kochi, Kerala, 10/07/2013: Anglers had field day on Wednesday as they got an unexpected holiday following hartal called by the LDF to seek the resignation of Chief Minister over solar scam and to protest against Tuesday's police action in the capital. A scene from old Vendruthy bridge near Thevara. Photo: H. Vibhu.