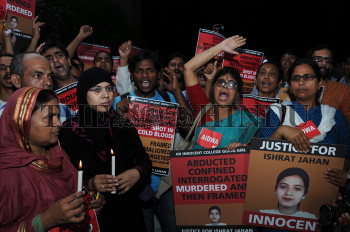 Caption : NEW DELHI, 06/07/2013: Ishrat Jahan's mother Shamima (left), sister Musarrat (second left) with supporters hold candles and posters bearing the portrait of Ishrat Jahan during a protest, to observe Day of Solidarity with Ishrat Jahan in New Delhi on Saturday. The protest was organised to demand justice for Ishrat Jahan, who was killed along with three others by the Gujarat police in a fake encounter in June 2004, and according to the Central Beurau of Investigation (CBI) was not a terrorist. Photo: Shanker Chakravarty