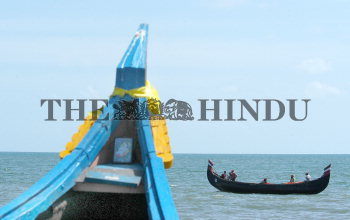 Caption : Traditional fishermen ventures out into the sea in Chavakkad in Thrissur district,Kerala. The Central and State government has implemented several schemes for the development of marine fisheries, infrastructure and post harvest operation. Fishermen are provided with financial assistance during lean fishing season where in the governments and the beneficiary contribute to total earnings during non- lean months. Monthly contribution of marine fishers is Rs 75 for eight months and for inland fishers Rs 50 for nine months and the accumulated amount is distributed back in ˛ equal installments at the rate of Rs 300 per month. According to Annual Reports of government of India 2006-07. Digital Photo: K_K_Mustafah 28/09/07