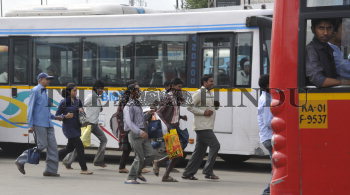 A SCENE AT KEMPEGOWDA BMTC BUS TERMINAL ON BUS DA

Caption : BANGALORE, 04/07/2013: Miles to go: With bus commuters complaining about increased fares, poor maintenance and lack of security, BMTC has a long way to go before it became efficient and reliable. A scene at Kempegowda BMTC bus terminal in Bangalore on July 04, 2013. Photo: K. Gopinathan