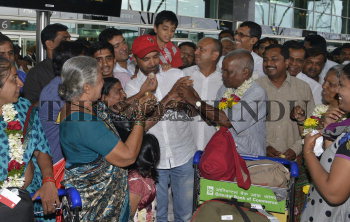 Caption : BANGALORE, 02/07/2013: Minister of State for Information and Infrasturcture Development Santosh Lad being greeted by devotees who were struck in Uttarakhand after landing in Bangalore International Airport along with him in Bangalore on July 02, 2013. Photo: K. Bhagya Prakash