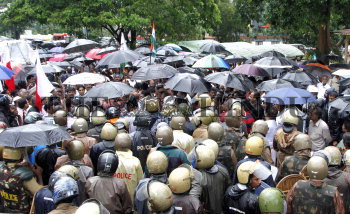 Caption : Kochi, Kerala, 24/06/2013: Persistent demand: Left Democratic Front activists stage a march to the Collectorate in the city on Monday. The protest was held as part of State-wide agitation demanding the resignation of Chief Minister Oommen Chandy in connection with solar scam. Photo: Vipin Chandran