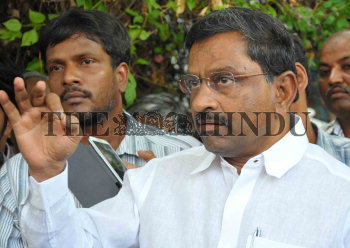 Caption : HYDERABAD, 04/06/2013: Suspended Andhra Pradesh's Health Minister Dr.D.L.Ravindra Reddy speaking to journalists outside after being forced by Government chief whip Gandra Venkata Ramana Reddy, Rudraraju Padmaraju, who takes hold of Congress Legislature Party office not allowing him to hold a press meet in the premises, in Hyderabad on June 04, 2013. On a day of emerging swift political development, pro Kiran's group holds the fort till senior legislator and followers left the place. Photo:Mohammed Yousuf