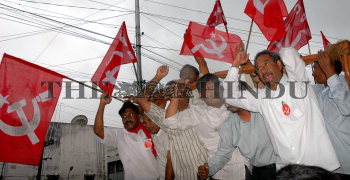 AGAINST AUCTIONING OF GOVERNMENT LANDS

Caption : HYDERABAD: 20/09/2007: Members of left parties getting arrested after holding demonstration near Andhra Pradesh Industrial Infrastructure Corporation in Hyderabad on September 20, 2007, in protest against auctioning of Government lands while denying land for the poor. Photo: Mohammed Yousuf