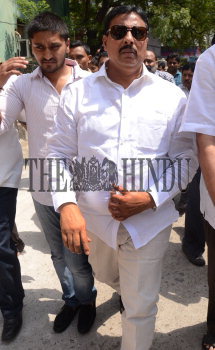 Caption : HYDERABAD,20/05/2013:Labour Minister Danam Nagender speaking to journalists after meeting the Home Minister P.Sabitha Indra Reddy, the resigned Minister at her home in Hyderabad on May 20, 2013, who have been named in charge sheets issued by the CBI in the Jaganmohan Reddy disproportionate assets case. Photo:Nagara Gopal