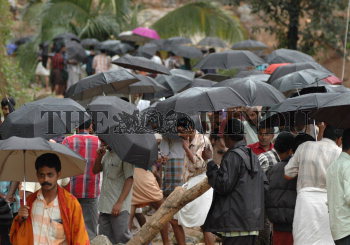 Caption : KOCHI, 18/09/2007: Thousands of people thronging to Vimalacity on Konnathady-Vellathooval Road in Idukki district on September 18, 2007, where water from a broken penstock pipe serving the Panniyar hydro-electric project causing major havoc washing away houses and livestock on September 17, 2007. Photo:H.Vibhu