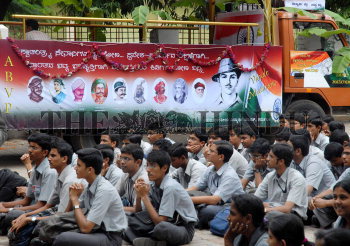 Caption : MYSORE, 17/09/2007: Students of Sadvidya College at the inauguration of a `rath yatra', to commemorate the 150th year of the First War of Indian Independence that broke out in 1857, and also to infuse the spirit of patriotism amoung students, in Mysore on September 17, 2007. It also marks the 100th birth anniversary of Bhagat Singh. Photo: M.A. Sriram