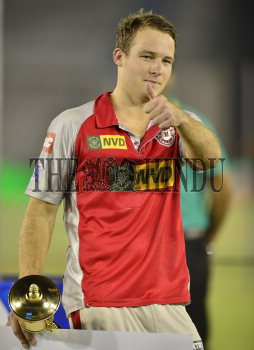 Caption : MOHALI 06/05/2013: KXIP player David MILLER with the Man of the Match award after KXIP's win over RCB during the encounter between Royal Challengers Bangalore and Kings XI Punjab in the Indian Premier League Twenty20 Cricket Tournament played at P.C.A. Stadium in Mohali on May 06, 2013. Photo: Akhilesh_Kumar